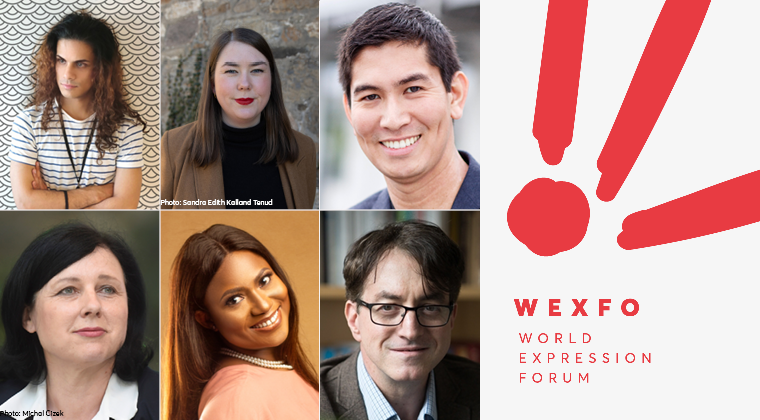 Freedom of speech is more important than ever. War and growing authoritarian tendencies, new technologies and cancel culture affect the status of free speech in different ways. Over two days in May, the World Expression Forum (WEXFO) will gather some of the brightest minds globally, nationally and locally, to consider freedom of speech in the current context and ask “what can we do?”

WEXFO embrace local, national and global issues around freedom of expression, and has invited speakers from both Norway and abroad. Speakers include representatives from the UN, the EU, Amnesty International, Belingcat, PEN, Meta, politicians, local youth, writers, artists and freedom of expression advocates. They include:

These are in addition to the previously announced Nobel Laureates Dmitry Muratov and Maria Ressa, and last year’s recipient of the Prix Voltaire, Rasha Al Ameer, who are each fighting courageous battles for freedom of expression.

The World Expression Forum event is an inspiration internationally, nationally and locally. WEXFO will be an annual event held for the first time on 30 and 31 May 2022. It will take place in Lillehammer, Norway, in connection with the Norwegian Festival of Literature. The ambition is that this event will be just as important for the development of freedom of expression as the World Economic Forum in Davos is for the development of the world economy.

No comments to show.
We use cookies on our website to give you the most relevant experience by remembering your preferences and repeat visits. By clicking “Accept All”, you consent to the use of ALL the cookies. However, you may visit "Cookie Settings" to provide a controlled consent.
Cookie SettingsAccept All
Manage consent